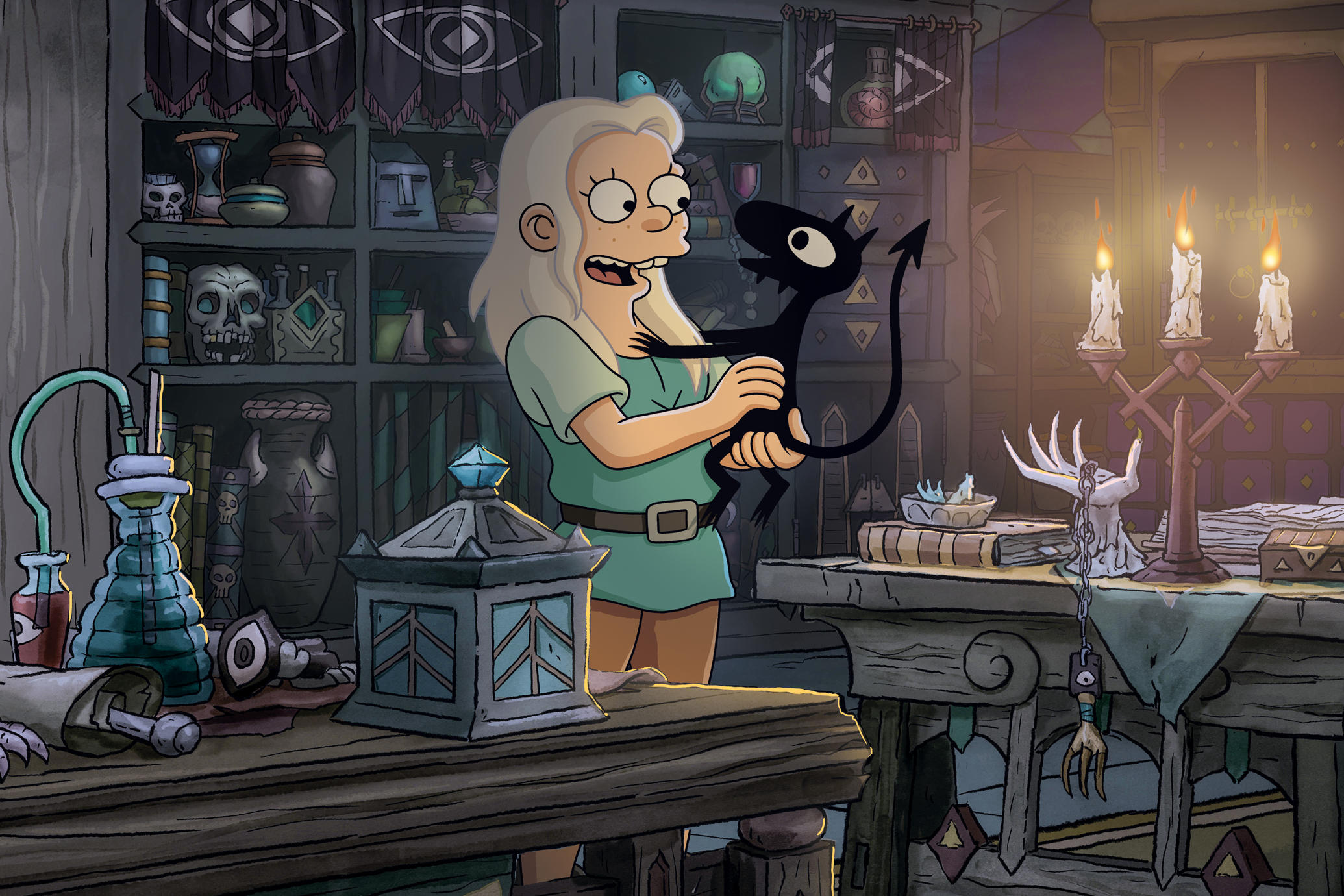 The second part of Disenchantment leaves us optimistically hopeful about Matt Groening’s new animated series streaming on Netflix. Although the first part of the season was slow and the humor was lackluster, leaving many episodes quite dull, it did pick up the pace towards the end.

Part 2 of Disenchantment picks up where part 1 left off. The entire kingdom of Dreamland has been turned to stone except for King Zøg, who is left feeling desperate and depressed. Queen Oona has been stranded at the bottom of the ocean. Bean’s mom is the culprit and seems to be up to no good. Luci is relinquished of his duties and confined to imprisonment in a bottle while Elfo remains dead. Bean doesn’t yet realise that Dagmar, her mother, is the one behind all the evil, and follows Dagmar to live in Maru. Maru is a much darker and dingier version of Dreamland. Dagmar also hints that Bean is destined to fulfill some mystic prophecy that remains hidden to Bean and the audience.

Josh Weinstein and Matt Groening must have found their groove because part 2 of the series fixes many things that we were concerned about in part 1. For starters, the humor relies more on the writing, wit, and character than comedy for comedy’s sake. It’s clever and makes the series that much more watchable. The easter eggs still remain and are just as good as they were in the first part of the series.

Overall, there’s improved character development. Princess Tiabeanie, or Bean, voiced by Abbie Jacobson, sets out on adventures of self-discovery beyond the confines of Dreamland as she attempts to forge a path away from her parents. Luci (Eric Andre) is also presented as a more well-rounded character and is less ambiguous in his actions and desires. Peripheral characters are also fleshed out a bit more with some even having their own episodes. Among those are Bean’s half-brother Derek (Tress MacNeille) and King Zøg (John DiMaggio). In fact, King Zøg is so stripped from his stereotyped confines from part 1, that he even becomes a really likable character in the series

Disenchantment was always a visual delight and part 2 is even more visually astounding. In part 2, characters are given the opportunity to explore places beyond Dreamland as the series begins worldbuilding. Among some of the new places the series has introduced is the kingdom of Maru, Hell, and Steamland. Of the three, Steamland stands out as the most visually astounding as it’s very different from Dreamland and the medieval/fantasy theme. Steamland, as the name suggests, follows the steampunk theme and is also presented as being way more progressive than Dreamland.

Because the Disenchantment shares the creators of both The Simpsons and Futurama, it was a given that the stakes were set high and that the series was going to be judged harshly from the start. I will always be interested in something that has Matt Groening’s name attached to it, even if it means being patient while waiting for a series to hit its full potential. Disenchantment vastly improves on part 1 of the season and displays its promising nature.