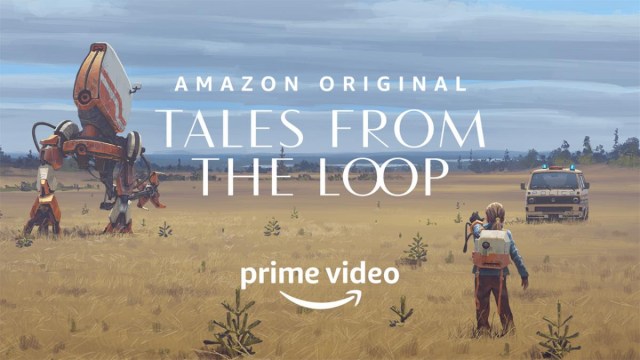 When science fiction and life meet

Tales from the Loop is an Amazon Prime series based on Simon Stålenhag’s art book of the same name. Although the book is set in Sweden, the series takes place in America.

Tales from the Loop follows the story of people in a town in Ohio that live above a mysterious and god-like structure that supposedly holds the ability to explore and answer the complicated questions to the universe. This mysterious is nicknamed “The Loop” by the townspeople. The series is set in the 1980’s but is juxtaposed by the retro pieces of technology strewn throughout the town.  This Ohio town also has a prairie feel about it.

It seems that everything that happens to the townsfolk somehow revolves around or is affected in some way by “The Loop”. The series first presents itself as an anthology where it would seem that each episode is unrelated and can be watched as standalone episodes. However, it later becomes apparent that there is an overarching story to follow that does reach a conclusion in the final episode however random and unexplainable that ending is.

The series is slow-paced and interwoven with melancholic music and very pensive moments for the characters. It focusses on the mundanity of the lives of the characters. However, it cleverly interweaves the mystery of “The Loop” and the science-element of its universe into the seemingly mundane existence of its characters. It can also be quite philosophical in the sense that the subject matter it deals with includes questions of what it means to be human. Whether we get any solid answers to this question is a different story. Tales from the Loop is not a feel-good series and is definitely not action-packed, instead, it steers more towards the thoughtful and melancholy side of things.

Here we learn that technology might not have the answers to those existential questions we so desperately seek answers to. Even if we have the ability to travel through time or control it. “The Loop”, however, does seem to have the ability to subtly and unobtrusively break the mundane cycles that some of the characters are stuck in.

The one jarring about the sci-fi in this universe is the juxtaposition between the setting and the technology. It can seem quite old and 80’s inspired in one way, and then quite progressive and futuristic in another. There are robots roaming around and there are people with robotic arms, yet they still paint their barns the old-fashioned way. The other rather annoying thing is that we know there are robots but they’re just sort of confined to almost aimlessly wonder the woods. We don’t know an explanation about why they’re there or why they’re confined to the woods. Perhaps, this will be explored in a second season.

You should watch this series because it’s beautiful. The landscape and the cinematography is beautiful. Even the robots are beautiful in their retro way.  Although, the storytelling is slow and pensive, it can also be beautiful and thoughtful.

While some claim that the storytelling is a let-down in that it’s unsatisfying, others claim that that is the exact point of the series, to mimic how unsatisfying life can be. It’s trying to tell us that life and answers to the great questions of life are ultimately unsatisfying. Tale from the Loop tells us that there are some mysteries that can’t be answered but also that there are some loops mundane and painful loops that can be broken. I’m not sure there’s a reason for a second season because as unsatisfying as the ending is, there’s still closure. As open-ended as the series is with its list of unanswered questions, it still somehow seems to have answered some of those questions. I do hope there is a second though.