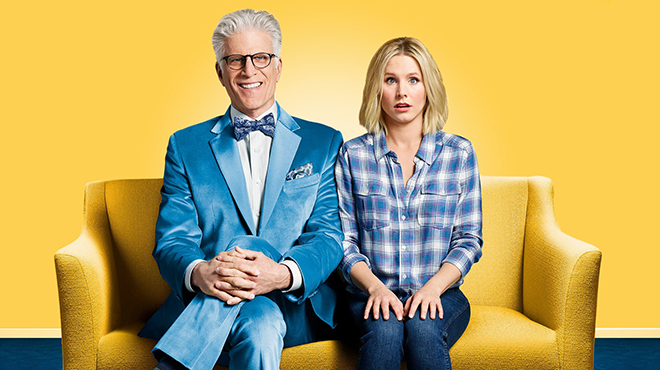 In a world where comedy series are being milked for all they’re worth even when the storyline is stretched so thin, ‘The Good Place’ provides a refreshing sanctuary from the stale and predictable comedy series we’ve become accustomed to. The series, however, is not without its flaws but it is a morish show that can be described as ‘highly binge watchable’.

Eleanor Shellstrop (Kristen Bell) is recently deceased and is introduced to “the good place” by the soothing presence of Michael (Ted Danson). Michael (a heavenly and calming creature of the afterlife) also explains to Eleanor that thankfully she ended up in “the good place” rather than an alternatively bad place. The viewer must therefore assume that “the good place” is essentially Heaven. How a person ends up in “the good place” is determined by an intricate point system that calculates a person’s actions on earth. One of the actions that could set you back 5.55 points is using Facebook as a verb while carefully stepping over a flowerbed would earn you 2.09 points. Only the people with the highest scores end up in this haven.

For most of the first episode we get acquainted with “the good place” and its bright sunny demeanor. The conundrum of the series rests on Eleanor and the fact that she doesn’t truly belong in “the good place” as the decisions she made on earth were mostly spurred by selfishness. Eleanor reveals to her soulmate (everyone in heaven is matched with the perfect soulmate) that she does not truly belong in heaven and that there must be a mistake in the system that allowed her entry. Eleanor’s soulmate is an indecisive ethics professor, Chidi (William Jackson Harper). Eleanor convinces Chidi to teach her ethics and the essence of morality so that maybe she could possibly earn her place in heaven. The series then takes on a set of delightful twists and turns that will undoubtedly leave you wanting to know more after each episode you watch.

This is not bullshirt (reference to the fact that no one can swear in heaven), you need to watch this series. The series is not offensive in any manner, in fact sometimes you wish it would be slightly more offensive to give it a bit of grittiness. It also only skims the surface of many philosophical debates on morality and ethics and you might wish it would delve a little deeper into the dilemma of morality. At its core, though, the series doesn’t aim to be a moral eyeopener or even an intrusive depiction of the afterlife. It remains a light-hearted form of entertainment that does provide just the right amount of escapism we sometimes seek. For a refreshingly (and sometimes necessary) slap in the face, you should watch ‘The Good Place’.

Similar series that deal with death and the afterlife in an unconventional and quirky manner are ‘Dead Like Me’ and ‘Pushing Daisies’. Like ‘The Good Place’ both the aforementioned series didn’t receive the recognition I feel they both deserve and both came to an unfortunately abrupt end that left viewers feeling somewhat unsatisfied. While there isn’t an established second season for ‘The Good Place’, we’re hoping to see more from the series (please don’t cancel it).