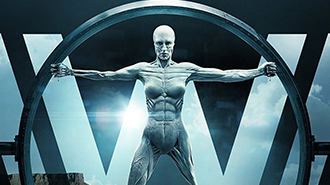 A masterfully macabre work of science-fiction

Westworld is the show that HBO is hedging its bets on as the Game of Thrones well starts to dry up. The creators of Westworld are husband-and-wife team Lisa Joy and Jonathan Nolan (who is the brother of well-known director, Christopher Nolan). The series also boasts J.J. Abrahams as executive producer. Westworld does have deeper origins. This HBO series is a recreated version of Michael Crichton’s 1973 film of the same name. It shall also be mentioned that Crichton just so happens to be the author of Jurassic Park (1990) and The Lost World (1995).

While some of the science-fiction themes and overarching narrative of the show are not things that are new to us, the series has enough plot twists and world-building to keep us substantially intrigued and ultimately waiting for more. Westworld is presumably set in an imagined future. It’s about a theme park that’ set in the Wild West and is filled with extremely life-like androids that are known as hosts. These hosts were created by Dr. Robert Ford (Anthony Hopkins) and his partner, Arnold. Arnold is someone we never really get to meet in the series but seems to have left a legacy of sorts. 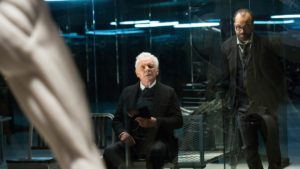 In the Westworld theme park guests pay a small fortune to be allowed to enter the park in which they’re able to act out the darkest of fantasies if they so desire. Guests can also choose to follow the different storylines and journeys in the theme park that are laid out by the creators of the park. In fact, guests can do almost anything they want to inside the park besides harming other guests. Included in these acts are murder, rape and various forms of torture. This brings us to that age-old debate about self-awareness and androids (a theme we’ve seen played out a countless number of times in popular culture). After the hosts experience these violent atrocities, they are simply reset and sent back into the theme park to loop and repeat. Essentially, the hosts are slaves that are living in a nightmare loop where their memories are consistently wiped. 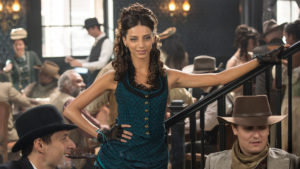 However, the hosts sometimes exhibit flashbacks and nightmares of the atrocities they’ve experienced. This reveals that the hosts may have some form of self-awareness or that they are just on the cusp of achieving self-awareness. In this sense, we get the sense that Westworld is the story of a mutiny by the creations against their creators. We also get the sense that the hosts are far more human than the actual human beings in the show.

The characters in Westworld

The Westworld is essentially told from three different camps of people – the hosts/androids, the people who control the park and work for the corporation and then there are the guests that visit the theme park. The central host character whose narrative loop and journey toward introspection seems to be Dolores Abernathy (Evan Rachel Wood). Another host character whose story we take interest in is Maeve Millay (Thandie Newton). Maeve’s journey to self-awareness seems to happen quicker than that of Dolores. Outside of the park, we have Dr. Robert Ford and his right-hand man Bernard Lowe (Jeffrey Wright). The main narrative of the guests that visit the park include William (Jimmi Simpson) and the ‘Man in Black’ (Ed Harris). 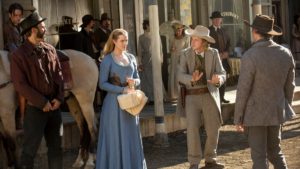 The plethora of characters coupled with Westworld’s non-linear narrative (yes, the story is told on more than one time-line) makes for some very interesting entertainment. As a replacement for Game of Thrones, Westworld’s first season has exhibited potential. On the one hand, though, the series did sometimes feel claustrophobic in all its focus on the world inside of the theme park.  We have no idea what the world outside of Westworld is like. This may be deliberate on the part of the creators, where our claustrophobia can be linked to the hosts being stuck inside the theme park. A similarity between our and the hosts’ lack of knowledge of the world beyond the theme park can then be drawn. Westworld is wildly imaginative where Lisa Joy and Jonathan Nolan took all the best bits of the original film. It did feel sometimes more drawn out than it needed to be but provided enough intrigue to leave us wanting more. Hopefully, it’s worthy enough to be a Game of Thrones replacement.